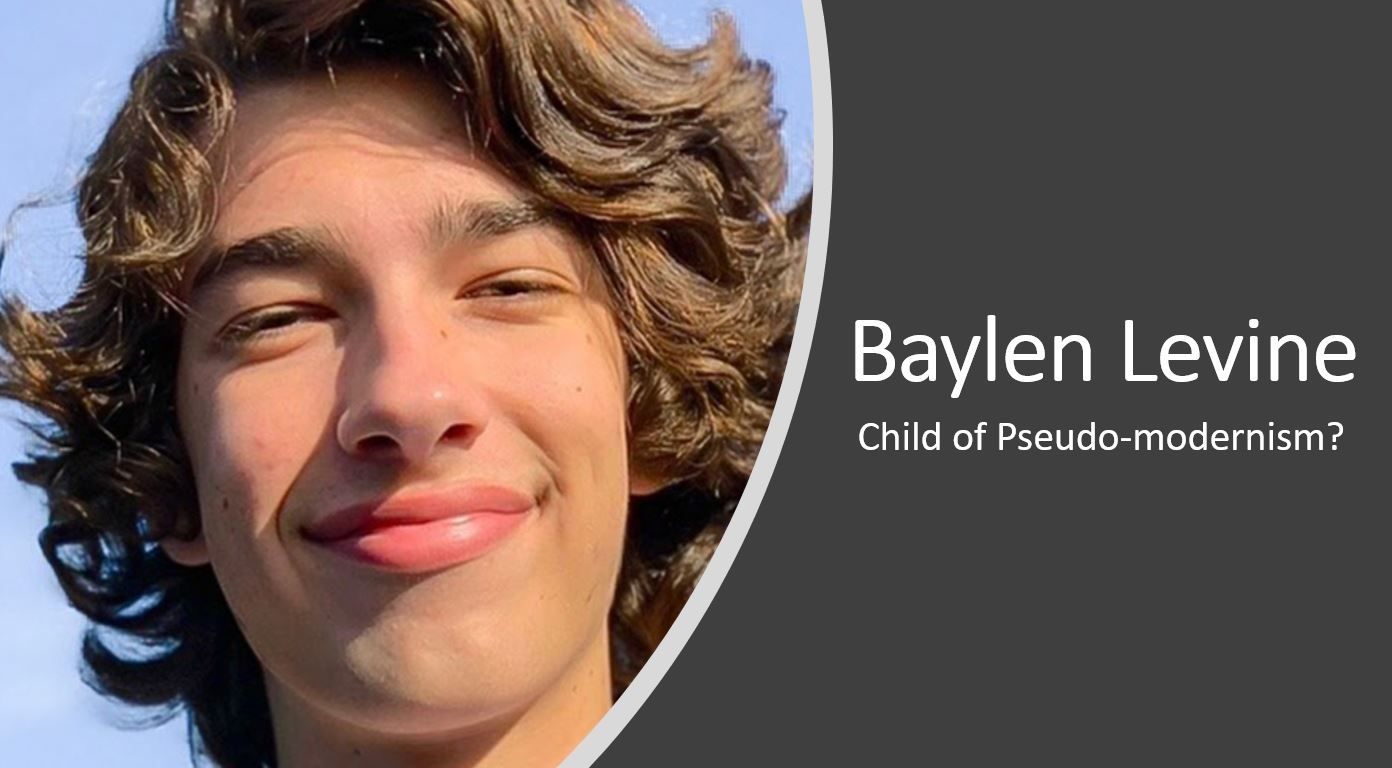 It may seem surreal to some that a 21-year old man is able to make hundreds of thousands[1] of dollars walking around Wal-Mart performing expletive-laden “pranks”[2] sprinkled with sexual innuendo, “stealing” golf carts, and making noises of flatulation next to senior citizens. Yet that is the plight of Baylen Levine, who is at first glance a very likeable YouTuber - with 3.12 subscribers as of this writing. It used to be that comedic derision and exploitation of the common man was confined to the big screen (think Ferris Beuller, Eric Andre’s Bad Trip, etc.). However, small, inexpensive, high-quality mobile cameras and YouTube have enabled regular folks to offer much more “realistic” entertainment in which the audience feels highly involved compared to the older model of watching a bunch of highly-paid actors follow a script on NetFlix.

This article explores the philosophy and dreams of Baylen Levine and attempts to understand Levine in his cultural context.  At 21, Levine is self-proclaimed "king of the youth"[3].  A review of Levine's content quickly demonstrates that he is driven by his desire for money, fame and proving his detractors wrong...the same goals that for centuries have led men to deep emptiness and futility.  On his 21st birthday, Levine tweeted, "In high school I remember I’d always fall asleep in my personal finance class and the teacher would lecture me. We’d argue and I told him I’d be famous by 19 and a millionaire by 21. I got laughed at. Today is my 21st birthday and I’ve accomplished both before I said I would."  In his YouTube episode, “Getting Naughty With Santa,” a tired Levine talks about how hard he has been working to edit his latest video, stating to his film crew, “save this video, cause I’m gonna be rich by the end of 2019.”  In 2018, Levine expressed the following sentiments to his audience,

“That’s why I’m doing this youtube stuff…I don’t want a real job at all…I don’t want to be behind a desk all of my life, get my little car every day, go to work, I want to do something that I love, and if this YouTube $*!# worked out, that would literally be a dream, cause like you do YouTube, you know the clothing, you go to movies, like you f’ing do stuff for kids…I really want to do stuff for kids, and just be a role model…I come across very immature, which I am…you shouldn’t care at all what people think…you can think whatever you think about me, I’m me…”

In the 17th and 18th centuries, the Enlightenment period “emphasized the autonomy of the individual, trust in the power of reason, conviction that human reason is objective, and that truth can be discovered by the rational human mind.”[4] The Enlightenment’s “modern” way of thinking valued the elements of absolute truth, science, logical and pragmatic organizations, and scientific investigation. While all of these elements are good in and of themselves, they became bad when the likes of Neitzche did not recognize their limitations and claimed that God is dead.

Post-Modernism:  My Heart is King

Scholars in the social sciences generally agree that there was a shift to post-modernism that began to take place as early as the 1930’s. Post-modern art and architecture tended to lack order and sense, and so did post-modern philosophy: post-modernism rejected the Enlightenment’s approach to thinking about life on the basis of absolutes, objectivity and reason. Some historians argue that post-modernism did not begin to take full hold in the United States until the 1960’s and the 1970’s. A key aspect of post-modernism is a turn to self. In Psychology of Being, Abraham Maslow (1908 –1970) wrote,

"Many European existentialists are largely reacting to Nietzsche’s conclusion that God is dead, and perhaps to the fact that Marx also is dead. The Americans have learned that political democracy and economic prosperity don’t in themselves solve any of the basic value problems. There’s no place else to turn but inward, to the self, as the locus of values."[5]

In his 2006 article, "The Death of Postmodernism And Beyond," Alan Kirby observed a shift to post post-modernism and a sub-phenomena he referred to as "pseudo-modernism":

Postmodernism conceived of contemporary culture as a spectacle before which the individual sat powerless, and within which questions of the real were problematised. It therefore emphasized the television or the cinema screen. Its successor, which I will call pseudo-modernism, makes the individual’s action the necessary condition of the cultural product. [6]

This inward turn to self is a hallmark of post-modernism, and is reflected in the words and philosophy of Levine.

Carl Trueman relates the story of his hard-working grandfather, a story that resembles my own grandfather. If asked why they went to work, their answer would be outward-focused: they worked to serve others, to put shoes on their children’s feet, and clothes on their backs. This response is much different than the response of Levine, who is inward-focused. The earlier Levine quote is littered with “I’s”, as he spells out his dream of having what he wants and doing what he loves without regard to the feelings and beliefs of his fellow human beings. The “pranks” that make him hundreds of thousands of dollars come at the expense of individuals, restaurants and retail stores.  His “work” amounts to him being little more than a shock jock who invades the space of hard-working folks under the auspices of a "prank" as he enriches himself.

Levine’s postmodern narcissism is so extreme that he often plays the victim when authority tries to hold him to rules (e.g., Angry Old Man vs Hypebeast!). This is because in his mind, he is superior to his hard-working victims. His victims are the inferior folk who do what he despises:  go to work every day, earn a living and try to keep order in their places of business.  Meanwhile, Levine mocks them with profanity.

Conclusion: Scripture is the Antidote to Postmodernism

Levine believes he is free, but he is not. He is postmodernisms' creation, its perfect child, embodying its self-centered, structure-defying ethic.  Levine is self-centered to the point that he will exploit others to get the fame and money he covets.  But Scripture points us to a different ethic, one in which servanthood is supreme (Philippians 2:7, 1 Peter 2:16, Mark 9:35), humility is esteemed (Philippians 2:1-30) and the livelihood of others is more important than one’s own livelihood (Philippians 2:3).  Scripture doesn't point us to our heart as the locus of our values and dreams, but to Christ who fills lives with eternal purpose.  Pray that Baylen will find the genuine treasure of peace and rest in Christ alone.

[2] In one of his earlier videos (“Pretending to Work At A Restaurant”), Levine used his friend’s old Moe’s uniform, slipped behind the counter and started to “work” by intentionally messing up a customer’s order, eating food in front of them and yelling expletives.  He then heads over to the competition’s restaurant (Willy’s) and publicly yells about how much he hates Moe’s.  He then goes back to Moe’s and explains to the management that they were on a “prank movie” and “apologizes” for his earlier behavior.  Everyone shakes hands and Levine creates a “feel good” moment, a move lauded by Levine’s fans with comments like, “I love how you always apologize and clean up after yourself or pay for stuff you wrecked.”  However, Levine doesn’t tell Moe’s management team that he has just yelled about how much he hates their store to several customers eating at Willy’s…the competition.  As Levine posts more and more videos, his language deteriorates as more expletives coolly spice up his content.

[5] Abraham Maslow, Toward a Psychology of Being. Jersey City, NJ: Start Publishing, 2012.
[6] Alan Kirby. “The Death of Postmodernism and Beyond.” Philosophy Now, 2006. https://philosophynow.org/issues/58/The_Death_of_Postmodernism_And_Beyond.
Posted in Psychology, Uncategorized